A Spark application is a self-contained computation that runs user-supplied code to compute a result. The highest-level unit of computation in Spark is an application.

Spark applications use the resources of multiple hosts within a Spark cluster. As a cluster computing framework, Spark schedules, optimizes, distributes, and monitors applications consisting of many computational tasks across many worker machines in a computing cluster.

A Spark application can be used for a single batch job, an interactive session with multiple jobs, or a long-lived server continually satisfying other application requests. Spark applications run as independent sets of processes on a cluster. It always consists of a driver program and at least one executor on the cluster. The driver process creates the SparkContext for the main Spark application process.

The execution model consists of runtime concepts: driver, executor, job, stage, and task. Each application has a driver process that coordinates its execution, which in most cases results in Spark starting executors to perform computations. Depending on the size of the job, there may be many executors, distributed across the cluster. After loading some of the executors, Spark attempts to match tasks to executors.

An application via the driver process launches an executor on a worker node. The executor runs tasks and keeps data in memory or on disk. Each application has its own executors.

An executor performs work as defined by tasks. Executors also store cached or persisted data. An executor has a number of slots for running tasks, and will run many tasks concurrently throughout its lifetime. The lifetime of an executor depends on whether dynamic allocation is enabled. With dynamic allocation, when an application becomes idle, its Executors are released and can be acquired by other applications.

For most workloads, executors start on most or all nodes in the cluster. In certain optimization cases, you can explicitly specify the preferred locations to start executors using the annotated Developer API.

A job is comprised of a series of parallel computing operators that often runs on a set of data. Each job gets divided into smaller sets of tasks called stages that are sequential and depend on each other.

Spark examines the dataset on which that action depends and formulates a Directed Acyclic Graph (DAG), an execution plan, for all the operator tasks in a job. Where possible, Spark optimizes the DAG by rearranging and combining operators. For example, if a Spark job contains a map operation followed by a filter operation, the DAG optimization re-orders the operators so that the filtering operation first reduces the dataset before performing the map operation.

In the Spark Web UI, for a given Job, you can view the DAG Visualization. 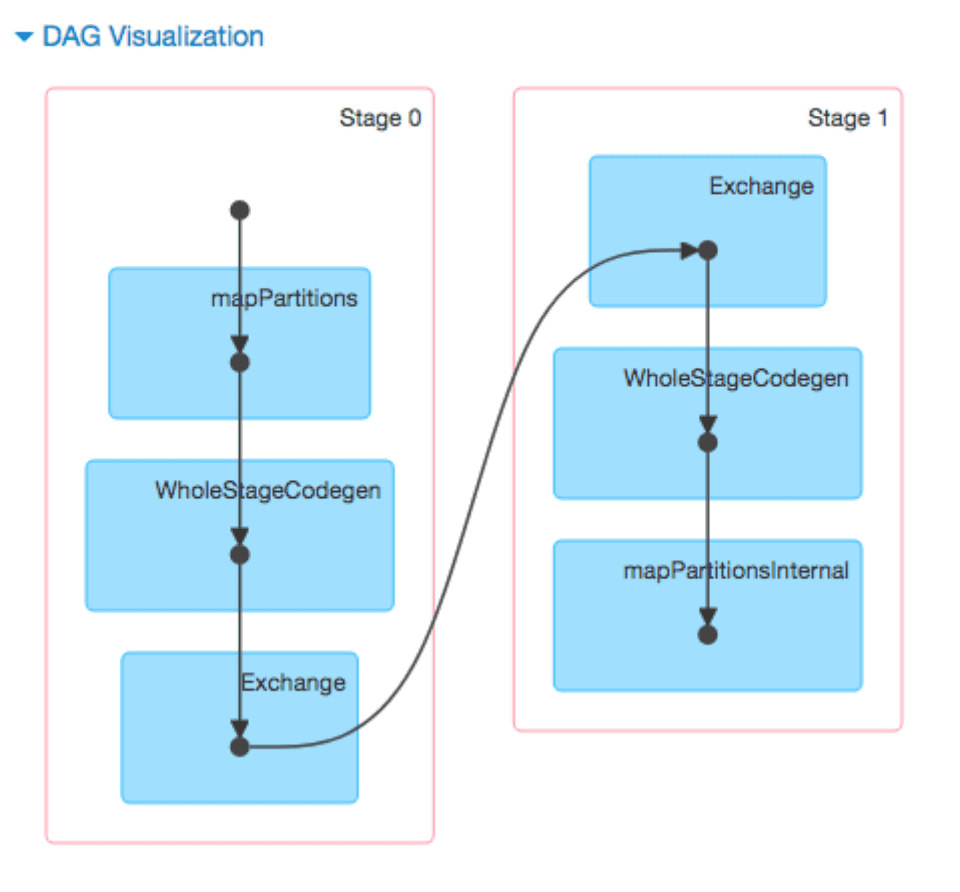 A stage is a collection of tasks that run the same code, each on a different subset of the data.  The execution plan assembles the dataset transformations into one or more stages.

A task is a fundamental unit of a job that an executor runs.