Use Incorta with Amazon AWS

Launching Incorta Analytics on AWS results in the set up of the following:

NOTE: The “analytics service” manages the Incorta UI and user queries, which are sent to Incorta to be executed. The analytics service also manages report schedules and on-demand export of data and images from Incorta. The loader service is specifically configured to manage data loading activities and creating parquet files and materialized views.

Before launching Incorta Analytics on AWS, we recommend that you ensure having the following:

In order to complete Incorta’s deployment successfully, it is required to possess the following technical skills at minimum:

Launching Incorta Analytics for a new VPC on AWS results in the following setup with the default parameters. 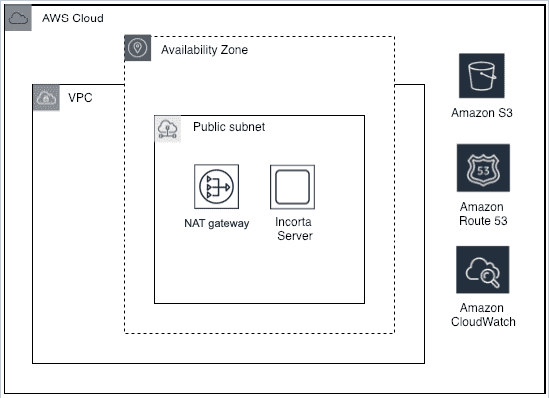 According to AWS best practices, deploying Incorta Anaclytics sets up an availability zone and a VPC with one public subnet that includes a NAT gateway and an Incorta Server. Refer to the following for a description of the infrastructure components:

A partnership has been established with AWS for predefined instances that align with Incorta’s pricing levels. Customers can go directly to AWS for the specified configuration. These Incorta configurations are available through the AWS Marketplace as long as users have purchased their own license from Incorta. An additional option is that Incorta can manage customers’ instance of Incorta on AWS for a fee as outlined in the table below.

The key assumptions behind the pricing outlined below are in line with Incorta’s overall architecture and business model. Specifically, each instance aligns with Incorta’s pricing level, but in some cases the memory available from AWS is more than what’s necessary since AWS’s memory increments are not the same as on-premises servers. The pricing assumptions below are for reserved rather than shared instances to assure performance. The term is a three-year commitment, during which users can convert their server instance to a larger one to match their needs.